Hive one was the first hive to have a late summer shook swarm treatment. Ex1 1-2015) Sunday 10th September 2015 I took all of the frames out of the hive except for two frames and filled the brood box with new frames. One of the two frames left in the hive with the new frames of foundation (some of the frames were without foundation but wired) was the frame with the queen on it. The other was a frame of newly laid eggs. Above the brood box I put on an Ashforth feeder and filled it with sugar syrup. The frames of brood and stores that I removed were put on to the National hive that had had a new queen unighted with it after the old queen had been taken from it during the splitting process - making that hive a double brood box. This process removed a lot of the mites in the colony headed up by the old queen. Ex1 2-2015)
After one week the two old frames were also removed and replaced with new frames. The queen by that time was laying on the new frames. This removed more mites in the two (now capped) frames of old brood. Hopefully a lot of the mites that were on the bees at the time when the brood was removed in stage 1) had moved into these two remaining frames of brood as there was no other brood available to them.
I kept on feeding the colony through into the Autumn putting a super on top of the brood box when the ivy was in flower.
In October I put the half full super under the well filled brood box. The two boxes went into the winter the warm way round. This colony will not be treated for mites during the winter of 21015/2016.

First inspection - a warm day at last - 3rd April 2016 see-video
The brood was relatively small - two frames - but the donut pattern shows that the queen has been laying for some time and a first batch of young bees are out. The super under the brood box still had some honey in the frames and I have now moved it to the top of the stack. The floor was new in September so I didn't change it this time but I did put a cleaned queen excluder on. I didn't see the queen. There were still several full frames of stores so I removed the fondant from the crown board.

13th April. One frame of brood removed and given to hive two.
27th April. Bucket of feed put on.
30th April. Quick inspection. Eggs and brood - colony is expanding. No swarm signs as yet. No signs of supersedure.
4th May. Feeder removed super put on.
28th May. Two frames of brood removed - to bail out hive three. Hive inspected queen seen - no signs of swarming. (those two frames are in a breeding box with queen cells)
14th June inspection - all OK no signs of swarming - there are lot of drones in the hive as a result of the wired frames put in. They were very busy today.
21st June inspection - all OK. Queen seen - but queen cups now being made. Non with eggs in so far.
24th July. E&B three frames of capped honey in the super
3rd August. Entrance closed right down to help prevent wasp attacks
8th August. Bees really busy one side of the small entrance opened. Eggs and brood in all stages. Five frames of capped honey taken (capping nice white colour) some half filled frames left in the one super left on.

The winter 2016/2017 has not been especially hard. We have had some cold nights of hard frost and a couple of gales with some very strong winds but generally is has been fairly dry most days. We have had spells of fine weather too giving the bees a chance every now and again to get out of the hive. The 9th of March was a warm day with temperatures in the low teens at one point.

9th March - Bees flying - see video
So much for my homemade floor that is now looking worse for wear after just two winters. Mousegard removed.
15th March First inspection (nineteen days earlier than last year) Perfect day for it. Eggs and brood in all stages on just two frames plenty of stores (eight frames) still in the brood box - see video I changed the floor - and it needed changing too as it was becominng a sodden mess. Queen not seen. I also inspected the daughter bred last year from this colony. She was laying well with four frames brood although her stores are run down and the colony needs a liquid feed now.
8th April Second inspection - brood increasing well. Not making honey yet. Queen seen marked yellow. Frame of drone brood put in. Four frames of stores still in brood box.- see video.

Third inspection 2017 - 19 April Eggs and brood present. The weather in the last ten days since my last inspection has been dominated by cold wind from the North East and although we have had some bright sunny days we haven't had warm balmy days. There wasn't much change to see in the brood box expect for the frame of drone brood foundation I put in on my last inspection. That has now been laid with eggs but on different days so there is lava at several different stages of development. I couldn't see any bees with deformed wings. There were a couple of quueen cups. See video 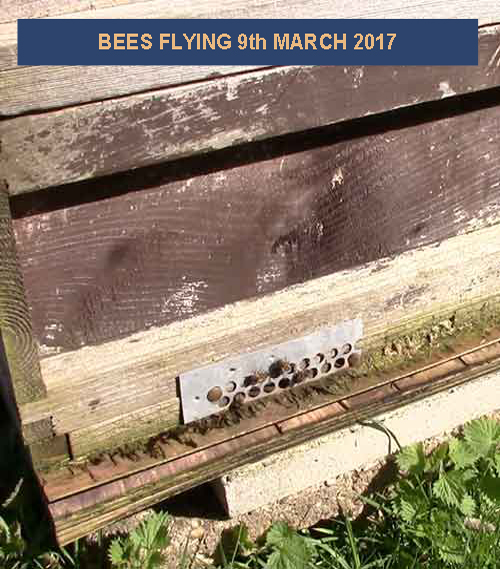 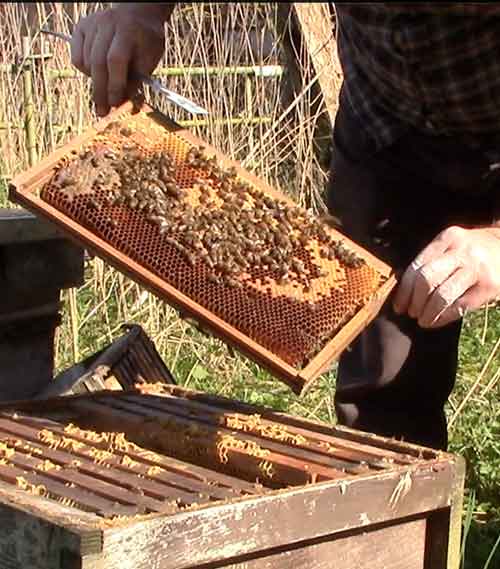 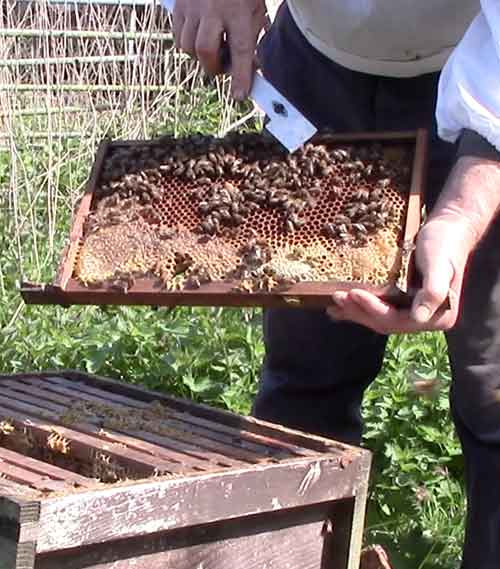 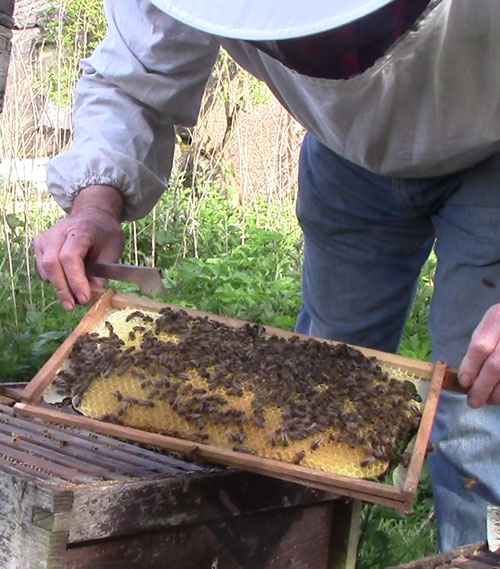